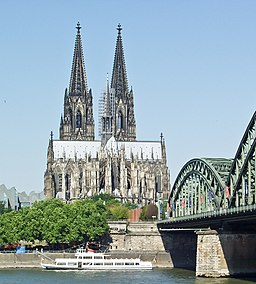 Cologne is the fourth largest city in Germany in terms of permanent residents. In this center of the north rhine-Westphalia region lives about 1.08 million inhabitants. The city has a very rich and long history and is currently an important cultural, educational and industrial center of the area.

Landmarks & Points of Interest in Cologne

There are a number of historical monuments to see in Cologne and you probably won’t be able to see them for a day. So if you have the opportunity, count on a longer visit.

St. Peter’s Cathedral – this Gothic cathedral is not only the dominant feature of the city, but of course also the seat of the local archbishop. You can find it by the river, in the immediate vicinity of the main station. It is included in the UNESCO World Heritage List.

Cologne Town Hall – a building with a Renaissance arcade and a high Gothic tower dates back to 1414.

Museum Ludwig – is a very important museum with collections of modern and contemporary art. And not only within Germany itself, but also within Europe. You’ll find it basically right next to the station and the Dome. It was founded in 1976 when the Lugwigs’ collection of pop art was donated to it. In Europe, it is the largest collection of pop art that can be seen. In addition, you can also look forward to the third largest collection of works by the famous Picasso in the whole world. Opening hours are from Tuesday to Sunday from 10 a.m. to 6 p.m., every first Thursday of the month is extended to 10 p.m.

Wallraf-Richartz-Museum – this museum houses a collection of art, the oldest exhibits dating back to the 13th century.

Römisch-Germanisches Museum – museum of antiquity in connection with the Rhineland.

The most famous educational institute in the city and in the whole region is clearly the University of Cologne. Its roots date back to 1388 when it was founded. In this respect, it is the sixth oldest university in all of Europe. In terms of the number of students, it is one of the largest in Germany.

Like other cities, Kolín prefers public transport mainly in the city centre. It is very advantageous for visitors and residents, because there will be no worries about the often complicated parking of the car. Local transport is very well signposted and organized, it runs on time and you can get with it everywhere within the city.

The main means of transport are high-speed trams. There are a total of 11 lines in the city, the total length of their tracks is close to 200 kilometers. In the city center, trams are hidden in tunnels. Trams are followed by bus lines as well as suburban S-Bahn trains.

The fastest and most convenient way to get to Cologne is, of course, an airliner. The international airport is located about 15 kilometers from the city in a southerly direction.

The airport also serves the city of Bonn and is the seventh busiest in Germany. From the airport to the city can be easily reached by train or bus, if you want more comfort and do not mind the higher price so of course by taxi. Thanks to the excellent motorway network throughout Germany, it is of course possible to travel by your own car or by long-distance bus. For example, Flixbus will take you here from many European cities even without a transfer and with early booking even at very reasonable prices.