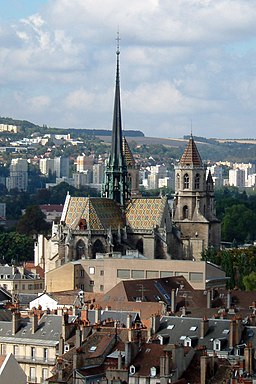 Dijon is a French historic city that is permanently inhabited by more than 150,000 inhabitants. You can find it in the eastern part of the country of the Gallic rooster, right on the river Ouche. It is also the capital of the Côte-d’Or department.

Since it is the center of the Burgundy wine region, it is clear what is not only for tourists one of the main products and attractions of this magical place. The other, of course, is the world-famous Dijon mustard, which got its name after this city.

There is also a racing circuit in Dijon, where the famous Formula 1 was even seen in the past.

Ducal Palace – today’s town hall, located on the Place de la Libération, formerly the seat of the Dukes of Burgundy.

Museum of Religious Art – a museum with a very clear theme.

Museum of Archaeology – the oldest finds with Dijon and Burgundy.

François Rude Museum – you can see the works of a well-known French sculptor.

Like other major cities, Dijon relies on public transport. For citizens and tourists, it is more convenient to move around in the center itself, where they do not have to deal with the usual worries about parking. In Dijon, public transport is mainly provided by buses, which are also complemented by minibuses and two tram lines.

Dijon is very easily accessible by passenger car. It lies on the A38 and A31 motorways. For example, from Paris the journey is about 313 kilometers long, from Munich then about 650 kilometers.

It is also convenient to connect by train. Dijon is served by high-speed trains TGV, located on the Line Marseille – Lyon – Paris. From Paris, you can get here in about an hour and forty minutes.

If you prefer a long-distance bus ride, the well-known company Flixbus will take you here from many European cities without a transfer and with early booking even at very reasonable prices.