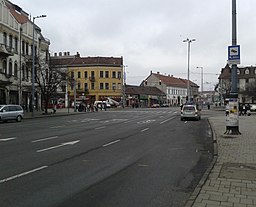 Miskolc is a well-known city that you can visit in the very north of Hungary. Within its country, it is the fourth largest city in terms of the number of residents, and its population is just over 150,000 permanent residents. If we include the surrounding agglomeration, then it is up to 300,000 people. The city lies only 40 kilometers from the border with Slovakia and approximately 145 kilometers from the capital of Hungary, Budapest. It is an important centre of heavy industry for its country.

It lies on both banks of the Szinva River, which has a very short flow, and after 30 kilometers it flows into the Slaná River.

Castle in Diósgyőr – clearly the most famous and also the most visited historical monument in Miskolc is the castle in the local part of Diósgyőr. It is very easy to reach as it lies right next to one of the local tram lines. It has a square floor plan with a tower in each corner.

In addition to the standard network of primary and secondary schools, we can also find a university in the city. The university was founded only in 1949 and does not have a very long history. Even so, it has its significance mainly within Hungary. However, it is not very attractive for international students.

Like other large cities, Miskolc relies on public transport to transport passengers within the city. In Miskolc you can move with the help of two tram lines, which are complemented by more than 40 bus lines. Even without your own car, you can get around the city where you need.

The city does not have its own international airport and the easiest way to get here is by highway or rail. If you are traveling from a greater distance, you will have to use the airport in Budapest or Bratislava and the subsequent transfer.

Miskolc is connected not only with Budapest but also with Košice in Slovakia via a motorway. Thanks to this, a journey by long-distance bus is also possible. The same connection with these large cities is also via the railway.