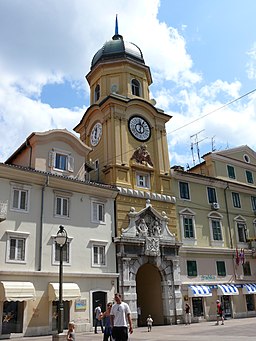 Rijeka is a very famous Croatian port city, which lies in the Quaverian Bay. The city has about 130000 inhabitants, if we include the entire surrounding agglomeration then a little over 300000 permanent residents. It is the most important town in the northern part of the Croatian Adriatic.

Monuments and culture in Rijeka

St. Vitus Cathedral – definitely worth a visit. The Baroque Jesuit building is interesting not only for its circular ground plan.

Church of Our Lady of Lourdes

Like other large cities, Rijeka is divided into smaller units. This can make orientation easier if you look for anything. The 34 city districts are hidden under the names (in alphabetical order):

As in other major cities, Rijeka has public transport. For transport around the city is advantageous not only in terms of price (for example, compared to a taxi) but also because you will not have problems with parking your own car.

In Rijeka, the main building block of public transport is the bus service. It has a total of seventeen lines with good continuity and accessibility.