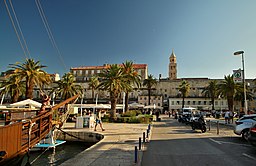 Split is a very famous Croatian coastal town, which can be found on the map in central Dalmatia. At the same time, it is also the second largest city in the country, with more than 178,000 inhabitants living here permanently, and including the entire metropolitan area, this number climbs up to 400,000.

Thanks to its location on the coast and also a number of important historical monuments, it is a very popular tourist destination, not only for residential, but also for day trips from a wide area where there are many resorts full of summer tourists.

That is why it is perhaps more advantageous, if you are really interested in historians of monuments in the city, to visit Split outside the main summer tourist season, ie outside July and August. There are noticeably fewer visitors in the city.

The historic center of Split itself is inscribed on the prestigious UNESCO World Heritage List.

Due to its location, Split is of course also an important port.

Diocletian’s Palace – this ancient Roman palace was built in the fourth century AD. The palace was already inscribed on the UNESCO World Heritage List in 1979. Inside you will find the oldest functional cathedral in the world. The palace is one of the sights that you should definitely not miss when visiting Split.

Diocletian’s water supply – a technical curiosity of how the palace was supplied with water.

Gripe Fortress – was built in the 17th century by the Venetians and served to protect the city from the Turks.

Church of the Holy Trinity in Split-Poljud – a very old church that dates back to the eighth century.

Meštrović Gallery – as the name suggests, it exhibits the works of the famous painter of the first third of the 20th century.

Museum of Croatian Archaeological Finds – here are exhibited the oldest finds directly from Split and also the surrounding area.

Croatian Maritime Museum – a museum with an absolutely clear focus can be found in the Gripe fortress and must not miss any fan of maritime themes.

Archaeological Museum of Split – with exhibits of ancient Dalmatia.

Split is also a very important center of higher education within Croatia. This is understandable given that it is the second largest city in the entire country.

The city is home to the University of Split, which is attended by about 20,000 students every year. It was founded in 1974. Students can choose from 180 fields of study at the faculties:

The fastest and, of course, the most convenient way to get to Split is by air. The international airport is located about 20 kilometers from the city, near Trogir. Of course, public transport is provided to Split, or you can use the services of a taxi.

If you do not want to fly or for health reasons you can not then consider a trip by long-distance bus. For example, Flixbus will take you here from many European cities even without a transfer. 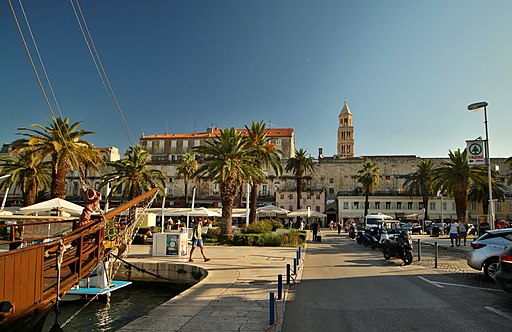