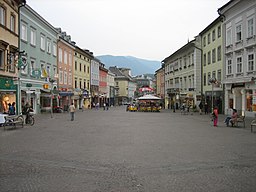 Villach is austria’s seventh largest city in terms of numbers and population and the second largest city in carinthia. For this, about 62,000 permanent residents are enough. It can be found in the very south of Austria on both banks of the Drava River. It lies basically at the border with Italy and Slovenia and is therefore a very important transport hub.

Due to its location, it is an important tourist center in the winter and summer seasons.

Hauptplatz – a historic square with buildings from the 12th century. It is worth mentioning especially the house where the famous philosopher and physician Paracelsus lived, as well as the building where Anton Ghon was born, who is famous for his research on tuberculosis.

Pranger – a copy of the original 15th-century pillory, which can be found on the lower main square. The original can be seen in the courtyard of the museum in Widmanngasse.

Lederergasse – an old alley with an alley, which is now part of a busy pedestrian zone.

Hegerhaus – this craftsman’s house in the late Gothic style, which includes the city walls, is definitely also worth a visit.

Villach City Museum – housed in a historic house right in the city center. The museum was founded in 1873 and the collections are understandably mainly related to Villach and the surrounding area.

Vehicle Museum in Zauchen – a collection of historic cars.

Like other large cities, Villach is divided into smaller administrative units for easier orientation and administration. They are:

Since Villach is located on a highway leading to the south of Europe, it is a frequent means of getting here by your own passenger car.

A long-distance bus journey is also a possibility, for example, the well-known company Flixbus will take you here from many European cities without having to change. In addition, when booking early, you can count on great ticket prices.

The nearest international airport is in Klagenfurt. It is about 40 kilometers away.