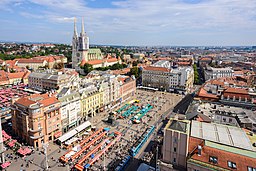 Zagreb is the largest and, of course, the capital of Croatia. About 790 thousand inhabitants live here permanently. It lies near the Slovenian border, on both banks of the famous Sava River. Of course, it is the center of Croatian political, cultural and educational events.

As in other major cities, public transport plays an important role in transport around the city. If you do not have your own car in the city, you will not have anything else left besides a taxi, but even if you have your car in Zagreb, you will at least not have to worry about parking in the center.

Like other European capitals, Zagreb relies primarily on tram lines. These are complemented by buses, suburban trains and also cable cars.

Zagreb is, quite understandably, also the center of Croatian theatre events. With a little searching, you can come across about twenty different theater scenes with different focuses and, of course, different levels. But if you are really interested in theatre, definitely head to the Republic of Croatia Square. There, in a truly beautiful neoclassical building, houses not only the Croatian National Theatre, but also the City Theatre.

Archaeological Museum of Zagreb – a museum with a clear focus can be visited at 19 Nikola Subic Zrinski Square. The museum is closed on Mondays, Tuesdays and Wednesdays from 10 a.m. to 6 p.m., and thursdays from 10 a.m. to 8 p.m. Friday and Saturday then again 10 – 18 and Sunday only 10 – 13 hours.

Tehnički muzej Nikola Tesla – an interesting technical museum that was founded in 1954. It can be found at 18 Savska Street. From Tuesday to Friday it is open from 9 a.m. to 5 p.m. On weekends, you can visit interesting exhibitions from 9 a.m. to 1 p.m.

Mimara Museum – one of the most popular museums can be found at Rooseveltov trg 5.. The basic entrance fee will cost you 40KN, reduced to 30KN.

Ivan Meštrović Museum – you can visit Mletačka ulica 8.. It is open from Tuesday to Saturday from 10 a.m. to 6 p.m. An adult will pay 40 HRK, children and students will pay 20 HRK.

and many other interesting museums.

For easier administrative division, the city uses seventeen neighborhoods. They are:

Of course, you can also get to Zagreb via bus lines. For example, Flixbus will take you here without having to transfer from many European cities. The price of the ticket can easily get below a thousand crowns when booked early.

The fastest and, of course, the most comfortable is air transport.Of course, Zagreb has its own international airport, which is located about 10 kilometers from the center.