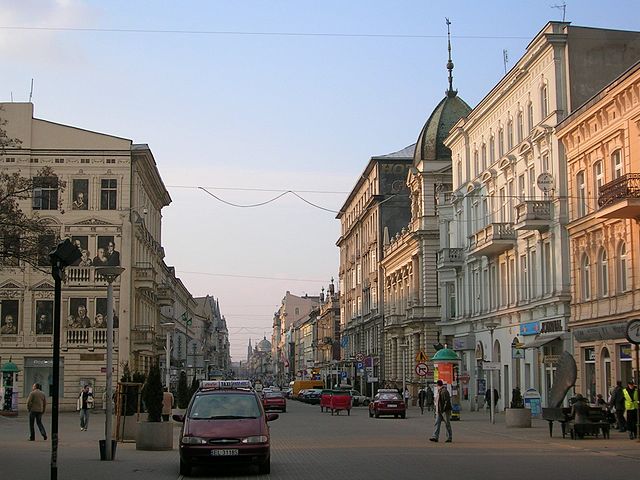 Łódź is the second largest city in Poland. It has a very convenient location in many respects, right in the central part of Poland. About 770,000 inhabitants live here permanently and their number is still growing. It lies about 130 kilometers from Warsaw, southwest to this capital.

It is a well-known historical city, but also one of the most important Polish industrial centers. At the same time, thanks to the local film school, it is a real center within Polish film. Most Polish feature films will be made here. But they are not very well known in our country.

The city works very well public transport, so you can easily get there wherever you want. Trams and buses run on time and timetables are clear.

The history of this beautiful town dates back to 1332 when the first written mention of the town with the name Łodzia is known. Łódź received city rights in 1423, when it was granted by the well-known King Vladislav II Jagiellon.

Since the city is located in Poland, it is no great surprise that most of the important monuments are ecclesiastical. You certainly must not miss the Basilica of Menša, the Protestant Church of St. Michael. Matthew with a beautiful organ.

And because the history of this city is quite closely connected with Russia (since 1815 the city was under its rule), there is also the Orthodox Church of St. Alexander Nevsky from 1884.

Another grateful destination for tourists from all over the world is the four-kilometer-long Piotrkowska Street. On it you will find a number of important buildings.

For nature lovers, the good news is that Łódź has its own botanical and zoo garden.

Zoo Łódź – the local zoo was founded in 1938 and you can admire the beauty of the animal kingdom on a total area of 16.4 hectares. Regular admission is available for 35 zlotys, family (2+2) for 100 zlotys. For groups, you can get a 10 percent discount. Opening hours depend on the season and you can check them here. The zoo is very well accessible via public transport.

Botanical Garden Łódź – originally only a garden of medicinal herbs, which was expanded in 1973 and today you can admire about 3500 plants in it. If you are interested in this field, you definitely can not let the visit go.

As in other cities of similar size, Łódź has the possibility of a very rich and diverse cultural activities.

Museum of Modern Art – do not miss this museum in any case, even if your visit to Lodz is really short. You will find a truly unique collection of modern art, which has been gathering here since the 30s of the last century.

Museum of the History of Łódź – if you are interested in the rich history of the region, you definitely must not miss the Neo-Baroque Palace of the industrialist Israel Poznański, where he resides.

The Central Museum of Textiles – and because the largest development of the city is very closely connected with the textile industry, of course, its museum can not be missing. You can find it in the historic building of the White Factory of Ludwik Geyer. You can see not only the largest collection of art materials in the whole of Poland, but also many other attractions.

As in other major European cities, Łódź pays off when visiting with the help of public transport. This often eliminates problems with searching and complicated parking. Timetables are clear and connections run on time.

You will have a total of 75 bus lines and 19 tram lines. They even connect Łódź with the surrounding towns. The line to Ozórkow is one of the longest in the world at 36 kilometres. (note: in 2018, this route had to be terminated due to poor technical condition)

The first electric trams began their service in Łódź in 1898. In the Polish territory controlled by Tsarist Russia, Łódź was the first city where this electrified transport was used.