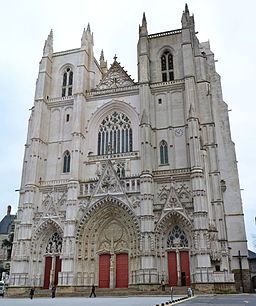 Nantes is a well-known city, the sixth largest in terms of population in the country of the Gallic Rooster. You can find them in the western part of this beautiful country, right on the banks of the Loire River. The Atlantic Ocean is then only 50 kilometers away. The city has a population of just over 300,000, and more than 710,000 permanent residents in the entire metropolitan area. Among other things, it is the birthplace of my favorite writer Jules Verne.

Cathedral of Saints Peter and Paul (Cathédrale Saint-Pierre-et-Saint-Paul) – this well-known Gothic cathedral has been a protected historical monument since 1862. Logically, it is the headquarters of the Nantes bishops. On the site of the cathedral there were previously church buildings, but they were eventually replaced by this landmark of the city.

The Castle of the Dukes of Brittany (château des ducs de Bretagne) – you definitely can’t miss it if you go to the historic centre. A very interesting fortified castle adorns the beautiful facades and today serves as the Historical Museum of the city of Nantes. You can also see a moat and a drawbridge.

Like other major cities, Nantes has very well-functioning urban transport. If you arrive in the city, you will not be able to do without it anyway, if you arrive by your own car, it will save you the trouble of complicated parking in the city center.

The main means of public transport in Nantes are trams. It has a total of three tracks that will cover the entire city. Trams are then complemented by buses, trains and ferry.

The fastest and, of course, the most convenient way to get to Nantes is by air. Of course, the city has its own international airport, which is located about 8 kilometers southwest of the city. It has good connections via trams and buses if you don’t want to pay for a taxi.